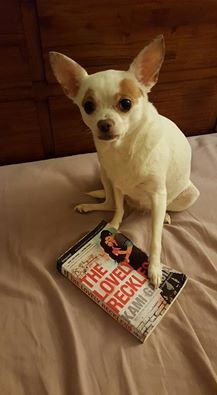 I’ve become an expert at avoiding things that could hurt me—which means I will figure out how to stay away from Marco Leone.

Seventeen-year-old Frankie Devereux would do anything to forget the past. Haunted by the memory of her boyfriend’s death, she lives her life by one dangerous rule: Nothing matters. At least, that’s what Frankie tells herself after a reckless mistake forces her to leave her privileged life in the Heights to move in with her dad—an undercover cop. She transfers to a public high school in the Downs, where fistfights don’t faze anyone and illegal street racing is more popular than football.

Marco Leone is the fastest street racer in the Downs. Tough, sexy, and hypnotic, he makes it impossible for Frankie to ignore him—and how he makes her feel. But the risks Marco takes for his family could have devastating consequences for them both. When Frankie discovers his secret, she has to make a choice. Will she let the pain of the past determine her future? Or will she risk what little she has left to follow her heart?

Frankie life turn upside down after suffering from pstd from seeing her boyfriend get killed. Her mom and step father can’t seem to take care of her anymore and ship her off one night to her father’s house. Back home where it all started her nightmares she wants to forgot. Slowly trying to back into a routine but all she can think about is the haunting thoughts of her boyfriend and who killed him. Then she bumps into an bad boy Marco with a rep sheet himself. When they met it’s instant connections between those two. With odd against set against them and everyone want them apart, will they make it in the end? Can Frankie face her fears and find the killer so she was be at peace with herself? Well you just need to read and find for yourself. This is a joy ride, with street racing, a dangerous game of love, who will come up on the top? Well this book comes out tomorrow so come pick it if you in the mood for forbidden love. So Happy Reading!