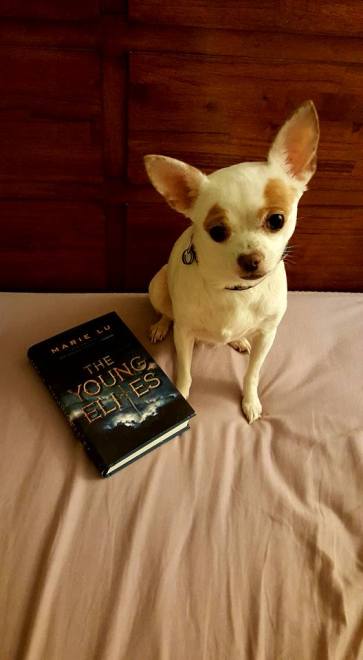 I am tired of being used, hurt, and cast aside.

Adelina Amouteru is a survivor of the blood fever. A decade ago, the deadly illness swept through her nation. Most of the infected perished, while many of the children who survived were left with strange markings. Adelina’s black hair turned silver, her lashes went pale, and now she has only a jagged scar where her left eye once was. Her cruel father believes she is a malfetto, an abomination, ruining their family’s good name and standing in the way of their fortune. But some of the fever’s survivors are rumored to possess more than just scars—they are believed to have mysterious and powerful gifts, and though their identities remain secret, they have come to be called the Young Elites.

Teren Santoro works for the king. As Leader of the Inquisition Axis, it is his job to seek out the Young Elites, to destroy them before they destroy the nation. He believes the Young Elites to be dangerous and vengeful, but it’s Teren who may possess the darkest secret of all.

Enzo Valenciano is a member of the Dagger Society. This secret sect of Young Elites seeks out others like them before the Inquisition Axis can. But when the Daggers find Adelina, they discover someone with powers like they’ve never seen.

Adelina wants to believe Enzo is on her side, and that Teren is the true enemy. But the lives of these three will collide in unexpected ways, as each fights a very different and personal battle. But of one thing they are all certain: Adelina has abilities that shouldn’t belong in this world. A vengeful blackness in her heart. And a desire to destroy all who dare to cross her.

It is my turn to use. My turn to hurt.

An blood fever spread throughout the city, the lucky one where alive, marked with powers, they call themselves Malfetto. Those who were unlucky died of the blood fever. Some families love and protect there own but some are not lucky and treated as outcast in their own homes. That is where Adelina begins at home, her whole family strike by the fever but her father. Her and her sister were the lucky ones to live. Adelina had been marked and her eyes missing, while her sister was left alone and not mark. For years she been living under harsh punishments from her father.. Trying hard to get her father love and attention and to grow her powers which never came when growing up. The the night she over heard on being sold she runs off, out of fear of her father finding her, her powers begin to show and she end up killing her father. Now found and on death row for her powers and murder….In the end other young elites, comes to the help her, an man name Reaper leader of other Malfettos, out there calling themselves young elites, hiding and being shelter for years, training to be a part of society again.

With finding help and recovering with the dagger society, she find out how powerful she is and having darkness in her heart, she can either use her power for good or evil? Enzo the leader of the dagger society take her under his wings even if the rest of the group don’t fully trust her. There darkness within her heart and powers, will she be able to control it or let it take over her mind and ruin everything dear to her? She must make an choice when her sister life hangs in the balance, taken by Teren the head guard of inquisition. With an weak king and letting Malfettos running around, Teren wants nothing but to kill them all. It’s an fight on who will make it to the thorne, the head leader Reaper or Teren?

Enzo- The leader of the Dagger society, also the hidden prince with fire powers of his own. Want the throne so no more Malfettos gets kill and live in peace.

Teren- Leader of the inquisition, also in love with the queen. He wants nothing but to kill every malfettos and let the queen rule. In the end he has secrets of his own and forcing Adelina to play to his side.

With so many twist and turns you never see coming. This book is action pack and kinda hard to put down. Lucky all the books are out as you journey through Adelina life and wonder what will become of her, is she evil or good? The struggle to finding the light through the darkness is hard enough, Will is consume her and loose more people she hold dare? Well that is for you to pick up the book and find out for yourself. Happy Reading!