Praise for CHILDREN OF THE FIFTH SUN
“An action-packed, globe-hopping science fiction thriller… pedal-to-the-metal pacing and relentless action make it easy to turn pages…” ―Kirkus Reviews
“Insane! What Gareth did here was incredible! This author took a global look at America, China, and Russia, and added a species from another era into the mix, to create a well-researched novel of suspense, intrigue, with dashing individuals. The characters travel the world on a unique mission while trying to stay out of the line of fire as rogue government agencies from several different countries try to stop them. It’s a wild ride from California to Peru, from Egypt to Siberia. The amount of research put into this novel is on par with a Michael Crichton novel. The main character, Kelly Graham, reminded me of Dirk Pitt from Clive Cussler’s novels. Overall, an incredible read and a book I’m recommending.” ―Jonas Saul, Best-selling author of the Sarah Roberts Series, April 2017
Suspend disbelief and let yourself travel on a downriver, undersea, and overland adventure in this well-constructed novel. The author takes you on a fast paced journey full of intrigue, government secrets, unusual creatures and just a tad of romance. Superlatives abound and the literary illumination paints an image so clear you feel you are there with the characters. For those who know the author, there are bit of his personality revealed which makes reading the novel even more enjoyable. A bit Tom Clancy, a hint of Dan Brown — authentically Gareth in his debut work. ―Charity Scripture
“Scientist Worthington’s understanding of the complexities and possibilities of marine biology and endocrinology are evident.” ―Publishers Weekly, May 2017 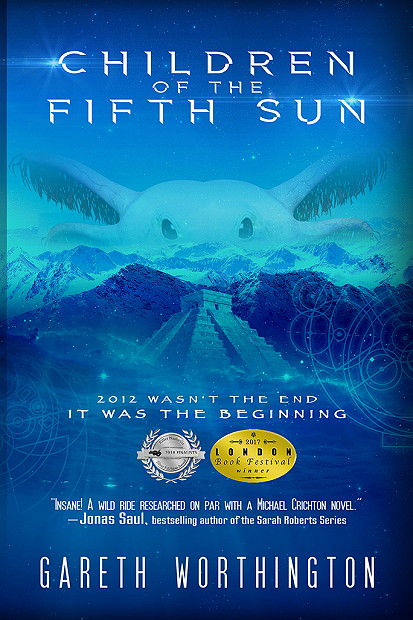 IN ALMOST EVERY BELIEF SYSTEM ON EARTH, there exists a single unifying mythos: thousands of years ago a great flood devastated the Earth’s inhabitants. From the ruins of this cataclysm, a race of beings emerged from the sea bestowing knowledge and culture upon humanity, saving us from our selfish drive toward extinction. Some say this race were “ancient aliens” who came to assist our evolution.

But what if they weren’t alien at all? What if they evolved right here on Earth, alongside humans . . . and they are still here? And, what if the World’s governments already know?

Kelly Graham is a narcissistic self-assured freelance photographer specializing in underwater assignments. While on a project in the Amazon with his best friend, Chris D’Souza, a mysterious and beautiful government official, Freya Nilsson, enters Kelly’s life and turns it upside down. Her simple request to retrieve a strange object from deep underwater puts him in the middle of an international conspiracy. A conspiracy that threatens to change the course of human history.

“Am I gonna turn into a fish? Shit, after the last couple weeks, I’m surprised I haven’t grown bloody gills and sprouted pink hair out of my ass.”

“Don’t worry, JT. I’m sure you’ll get to steal something soon.”

“I’m indestructible. You know that.”

“You’ve got issues with food. Anyone ever told you that?”

“I can see right up your nose.”

“Let me guess, you found aliens from Mars and thought it would be a great idea to give them CPR, and now they’re running around in giant tin cans with legs, blowing shit up?”

“We search for something or someone—our Huaca, our special place. The person, place, or thing we believe will make us whole. To fill the void. Some of us, if we’re lucky, find something close to it. Someone we feel is our other half. And if we’re really lucky, the other person feels the same way.”

You can purchase Children of the Fifth Sun at the following Retailers: 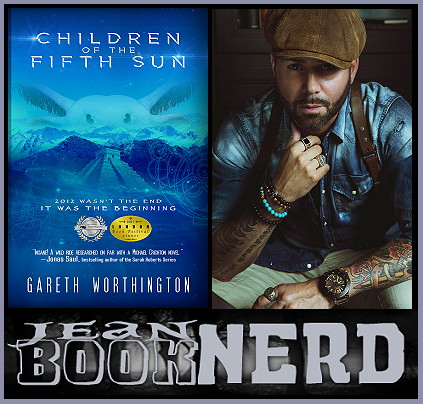 Gareth Worthington is a trained marine biologist and also holds a doctorate in comparative endocrinology. Currently, Gareth works full time for the Pharmaceutical industry helping to educate the World’s doctors on new cancer therapies. In his spare time Gareth has a number of passions, including: martial arts – he trained in Muay Thai at the prestigious EVOLVE MMA gym in Singapore and currently trains in MMA at Phoenix Sportkampf, Switzerland; playing acoustic guitar; studying ancient history; drawing; and most of all writing fiction.
An award winning author, he hopes to one day hang up the pharma hat and write full time.
You can visit his author page and blog at www.garethworthington.com