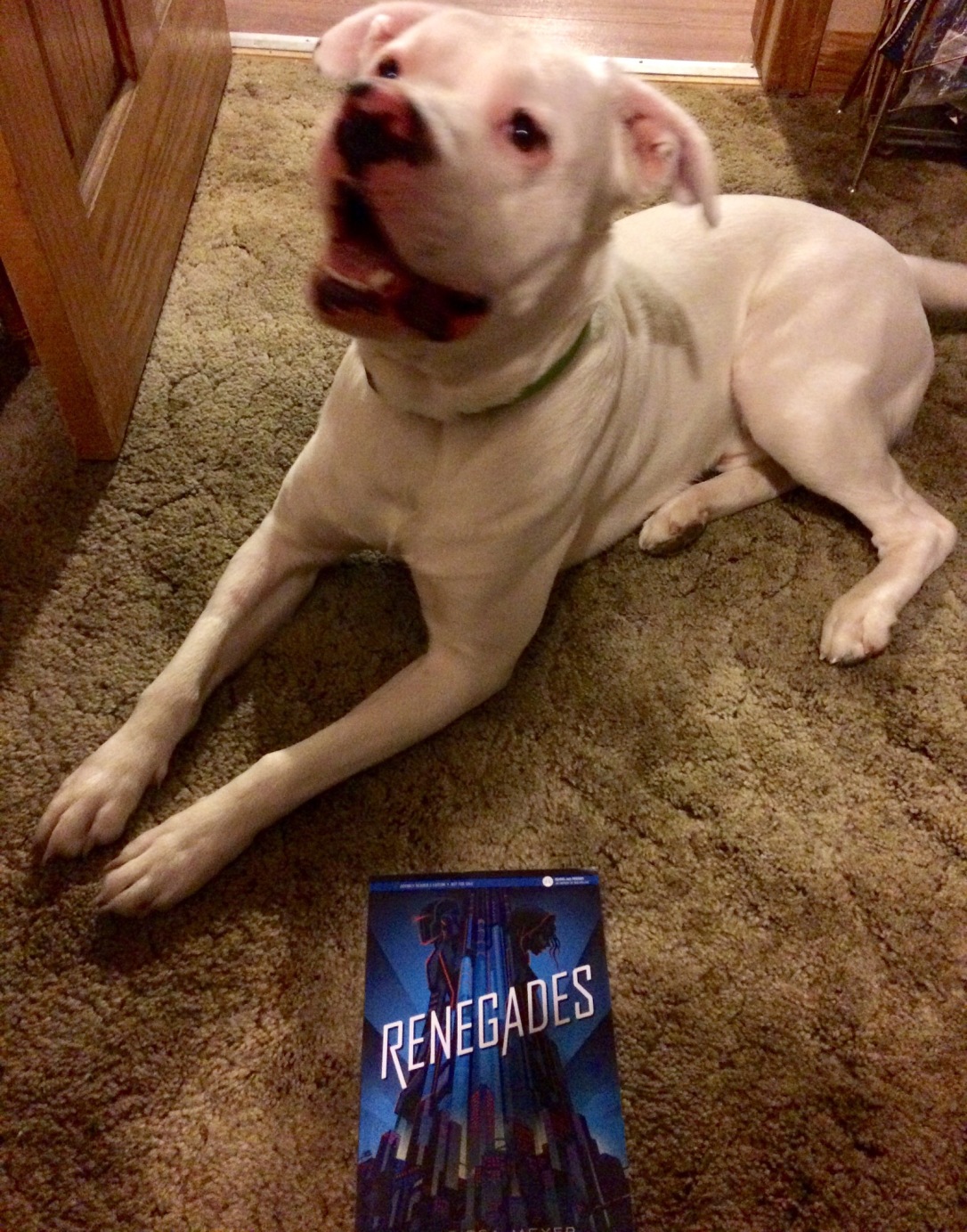 Hello Everyone! My name is Stacy and I’ll be a guest blogger for today! I would like to introduce you guys to Louie. Louie is our rescue dog who loves books! We are reviewing Renegades to celebrate its release tomorrow. Enjoy!!

The Renegades are a syndicate of prodigies―humans with extraordinary abilities―who emerged from the ruins of a crumbled society and established peace and order where chaos reigned. As champions of justice, they remain a symbol of hope and courage to everyone…except the villains they once overthrew.

Nova has a reason to hate the Renegades, and she is on a mission for vengeance. As she gets closer to her target, she meets Adrian, a Renegade boy who believes in justice―and in Nova. But Nova’s allegiance is to the villains who have the power to end them both.

”All revolutions come with death. Some must die so that others might have a life. It is a tragedy, but it is also a truth.”

Just like everyone else I was freaking out to get my hands on an arc copy of this. I stomped my foot, placed my hands on my hips, and cried a cry of a thousand children. My friend picked me up a copy at NYCC and I felt that my life was complete (Sorry, Trent) Like the dark and gloomy sky opened up and shot a rainbow my way.

Then I actually started to read it. It breaks my heart to say that this was way beyond disappointing. I actually frowned the entire time while reading this, frowned!!!

Renegades starts off with a bang, literally. Thirtyish pages in and I was enthralled. It kicked into high-packed action and thought it would be like that throughout. It reached its peak at thirtyish pages and dropped like a rock in a river. It reached its highest point way too early and struggled to pick itself back up.

It was a lot of yakking and a lot less action. You would think for a superhero novel that it was going to be a lot of sabotage, secrets, and karate chops to the throat. (Shaking head and pouting)

Can we all take a minute and talk about The Sentinel? How in the living hell did no one know who this character was? Seriously!? Whenever he appeared, a very prominent member disappeared! Put it together people! My brain throbs just thinking about this!

Renegades disheartened me so much that I would love to have my three days back. Over four hundred pages of superhero clichés and I don’t even want to think about crime fighting for a very long time.

Are you ready for an extremely long and tedious display of so-called Superheroes?