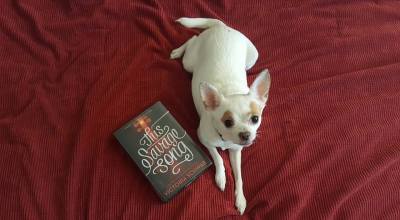 There’s no such thing as safe in a city at war, a city overrun with monsters. In this dark urban fantasy from author Victoria Schwab, a young woman and a young man must choose whether to become heroes or villains—and friends or enemies—with the future of their home at stake. The first of two books.

Kate Harker and August Flynn are the heirs to a divided city—a city where the violence has begun to breed actual monsters. All Kate wants is to be as ruthless as her father, who lets the monsters roam free and makes the humans pay for his protection. All August wants is to be human, as good-hearted as his own father, to play a bigger role in protecting the innocent—but he’s one of the monsters. One who can steal a soul with a simple strain of music. When the chance arises to keep an eye on Kate, who’s just been kicked out of her sixth boarding school and returned home, August jumps at it. But Kate discovers August’s secret, and after a failed assassination attempt the pair must flee for their lives.

The start of the book you meet Kate Harker, a ruthless teen who wants to prove to her father she can take over his life work and prove to him she not some weak child anymore. Then there is August Flynn a monster, human on the outside but killer on inside. He wants nothing more then to fit in with the other humans. He gets task with watching Kate to make sure the peace of the city still there. Things go wrong one day when someone tries to kill Kate and August saves her life. Can Kate trust a monster with her life or is she as ruthless as her father? A war is coming between monsters and humans. Who will get hurt in the cross fire when is all end? Well you have to read and find out for yourself. This book is action pack and full of monster that bump in the night. So get ready and be prepare as Bella tells you a little bedtime story. So Happy Reading!